The uninterrupted testimony of ages 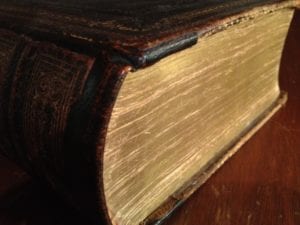 We receive the books of the New Testament as the genuine works of Matthew, Mark, Luke, John, Paul, James, Peter, and Jude, for the same reason that we receive the writings of Xenophon, of Polybius, of Caesar, Tacitus, and Quintus Curtius; namely, because we have the uninterrupted testimony of ages to their genuineness, and we have no reason to suspect imposition. This argument, Michaelis remarks, is much stronger when applied to the books of the New Testament than when applied to any other writings; for they were addressed to large societies in widely distant parts of the world, in whose presence they were often read, and were acknowledged by them to be the writings of the apostles. Whereas the most eminent profane writings, that are still extant, were addressed only to individuals, or to no persons at all: and we have no authority to affirm that they were read in public; on the contrary, we know that a liberal education was uncommon, books were scarce, and the knowledge of them was confined to a few individuals in every nation.

The New Testament was read over three quarters of the world, while profane writers were limited to one nation or to one country. An uninterrupted succession of writers, from the apostolic ages to the present time (many of whom were men of distinguished learning and acuteness), either quote the Sacred Writings, or make allusions to them; and these quotations and allusions, as will be shown in a subsequent page, are made not only by friends, but also by enemies. This cannot be asserted of the best classic authors; and as translations of the New Testament were made in the second century, which in the course of one or two centuries more were greatly multiplied, it became absolutely impossible to forge new writings, or to corrupt the sacred text, unless we suppose that men of different nations, sentiments, and languages, and often exceedingly hostile to each other, should all agree in one forgery. This argument is so strong, that, if we deny the authenticity of the New Testament, we may with a thousand times greater propriety reject all the other writings in the world;—we may even throw aside human testimony.

Thomas Baldwin Thayer: If this was false, how quickly it could have been proved so