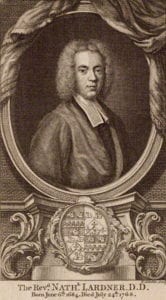 TWO OBJECTIONS TAKEN FROM THE SILENCE OF JOSEPHUS.

I. He has not mentioned the slaughter of the infants of Bethlehem:

II. Nor of the Galileans, whose blood Pilate had mingled with their sacrifices.

ST. MATTHEW says, chap. ii. 16, “Then Herod, when he saw that he was mocked of the wise men, was exceedingly wroth, and sent forth, and slew all the children that were in Bethlehem, and in all the coasts thereof, from two years old and under, according to the time which he had diligently inquired of the wise men.”
It is objected to this, that if there had been so cruel a slaughter made by Herod, of innocent infants at Bethlehem, a place not far from Jerusalem, it is very unlikely it should have been omitted by Josephus, who has written the history of the Jews, and particularly of the reign of Herod.

To this I answer:

1. This appears to me to be at the best an objection of a very extraordinary nature. The most exact and diligent historians have omitted many events that happened within the compass of those times of which they undertook to write: nor does the reputation which any one historian has for exactness, invalidate the credit of an other, who seems to be well informed of the facts he relates. Suetonius, Tacitus, and Dio Cassius, have all three written of the reign of Tiberius: but it is no objection against the veracity of any one of them, that he has mentioned some things of that emperor, which have been omitted by the rest. No more is it any objection against St. Matthew, that he has related an action of Herod not mentioned by Josephus.

2. There have been as great cruelties committed by many eastern princes; nor was there ever any man more likely than Herod to give the orders here mentioned by St. Matthew. When he had gained possession of Jerusalem by the assistance of the Romans, and his rival Antigonus was taken prisoner, and in the hands of the Roman general Sosius, and by him carried to Mark Antony, Herod by a large sum of money persuaded Antony to put him to death, Herod’s great fear was, that Antigonus might some time revive his pretensions, as being of the Asmonean family. Aristobulus, brother of his wife Mariamne, was murdered by his directions at eighteen years of age, because the people at Jerusalem had shown some affection for his person. In the seventh year of his reign from the death of Antigonus, he put to death Hyrcanus, grandfather of Mariamne, then eighty years of age, and who had saved Herod’s life when he was prosecuted by the sanhedrim; a man, who in his youth and in the vigour of his life, and in all the revolutions of his fortune, had shown a mild and peaceable disposition. His beloved wife, the beautiful and virtuous Mariamne, had a public execution, and her mother Alexandra was put to death soon after. Alexander and Aristobulus, his two sons by Mariamne, were strangled in prison by his order upon groundless suspicions, as it seems, when they were at man’s estate, were married, and had children. I say nothing of the death of his eldest son Antipater: if Josephus’s character of him be just, he was a miscreant, and deserved the worst death that could be inflicted.

Some intrinsic evidences of the Gospels’ genuineness

Charles Leslie: How unreasonable to reject these facts

Jeremy Belknap: The nature of testimony and the rules of evidence universally acknowledged among mankind