We cannot fail to recognise Him… 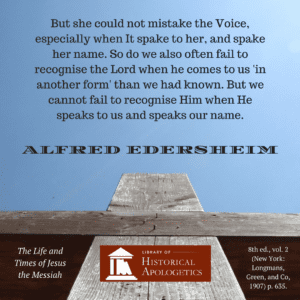 ‘Woman, why weepest thou? Whom seekest thou?’ The hope, that she might now learn what she sought, gave wings to her words–intensity and pathos. If the supposed gardener had borne to another place the Sacred Body, she would take It away, if only she knew where It was laid. This depth and agony of love, which made the Magdalene forget even the restraints of a Jewish woman’s intercourse with a stranger, was the key that opened the Lips of Jesus. A moment’s pause, and he spake her name in those well-remembered accents, that had first unbound her from sevenfold demoniac power and called her into a new life. She had not known his appearance, just as the others did not know him at first, so unlike, and yet so like, was the glorified Body to that which they had known. But she could not mistake the Voice, especially when It spake to her, and spake her name. So do we also often fail to recognise the Lord when he comes to us ‘in another form’ than we had known. But we cannot fail to recognise Him when He speaks to us and speaks our name.

It is not for want of strength